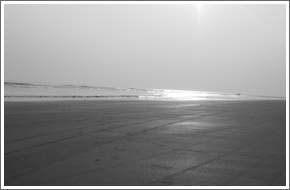 Digha is West Bengal's most popular sea resort and tourist spot located south west of Calcutta. It is 187 km from Calcutta and Described as the 'Brighton of the East best for a holiday. Digha has a low gradient with a shallow sand beach with gentle waves extends 7 kms in length.

In Digha sea starts about a mile away from the start of the beach. The scenic beauty of this place is charming and luring. The beach is girdled with casuarinas plantations along the coast enhancing the beauty of this place. These trees apart from beautifying the sands also aid in reducing the erosion on the dunes.

One can view both sunrise and sunset at Digha sea beach. The sunsets and sunrises reflecting off the salty waters of the Bay of Bengal are something straight off an artist's easel. The sea at Digha is calm and shallow for about a mile from the beach making it quite safe for swimming.

Digha Originally known as Beerkul during Warren Hastings time was discovered in the late 18th century by the British. It is mentioned as the "Brighton of the East" in one of Warren Hasting's letters (1780 AD) to his wife.One can view both sunrise and sunset at Digha sea beach. The sunsets and sunrises reflecting off the salty waters of the Bay of Bengal are something straight off an artist's easel. The sea at Digha is calm and shallow for about a mile from the beach making it quite safe for swimming.

Also In 1923, an English tourist John Frank Smith was charmed by the beauty of Digha and started living here. His writings about Digha slowly gave exposure to this place. After independence, he convinced West Bengal's chief minister Dr. Bidhan Chandra Roy to develop Digha as a beach resort.

The Marine Aquarium and Research Centre (MARC) was established in the year 1989 during the Seventh Five Year Plan. The major objective of the Centre is to display the marine biodiversity of the region and impart its values to the common people and to carry out the research activities. MARC has largest inbuilt marine aquarium in the country and equipped with sea water circulation system and advanced filtration unit. The aquarium has 24 big sized (15x10x10') marine tanks and 8 fresh water (3x2x2') tanks which are equipped with compressed air supply, light and regulated supply of inflow & outflow of water. Hundreds of visitors make it a point to view the Aquarium every day. The aquarium is opened to public on all working days from 9.3 0 A.M. to 6 P. M.

Only 8 km away from Digha the century old Temple of Lord Shiva at Chandaneswar,near Bengal and Orissa Border.Nearly half million people & pilgrims visit the temple at Maha Vishuva Sankranti or Gajan Mela : towards the end of Chaitra.

Junput is yet another beach resort of West Bangal, although the beach here is usually exposed only when the tide ebbs. The casuarina trees, kissed by the gentle breeze at Junput, are a soothing sight.

After independence, Junput was overlooked for development as a beach resort, Digha being chosen instead. Later, Junput was harnessed for scientific research and industry. A centre for studies in marine biology is the nucleus for the area's sea-fish research and shark oil extraction. Junput also has a farm for breeding ducks. The beach is unspoilt. Brackish water fish cultivation and research are done here by the State Government Fisheries Department.

Junput is 40 km. from Digha and regular bus services are available. A bus from Digha would lead to Junput via Kanthi. Kanthi and Junput are eight kilometres apart.

Shankarpur, a virgin beach as yet, is a recent discovery. It is a twin beach of Digha, around 14 km from Digha, along the Digha-Contai Road. It is now developed as a sea resort with hotels It offers nearly all the pleasures of a private beach with casuarina plantations. Shankarpur is mainly credited for all the advantages of Digha and decreasing the crowd of Digha. It can boast of a wide and unspoilt beach, casuarina groves by the side of a gentle sea and a good climate round the year. Apart from the long, tree-lined beach, the main attraction is the Shankarpur Fishing Harbour Project. 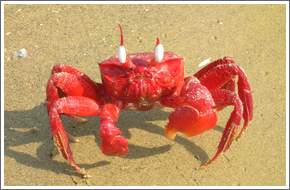 Mandarmani is a beach resort in Purba Medinipur district of South Bengal , one of the southern districts of West Bengal . It is almost 180km from Kolkata Airport on the Kolkata - Digha route and just 14km from Chaulkhola .Mandarmani is one of Bengal’s recently developed tourist destination that lies close to ever-popular Digha and Shankarpur. With sun and surf, pristine sea beach and untrammeled silt coloured sand, this beach is slowly becoming popular among the tourists.