Situated on the banks of the River Torsa 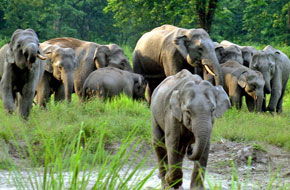 Jaldapara is one of the adventure capitals of the Dooars region which is situated in the Jalpaiguri District of West Bengal. It stretches in an area of about 14 sq. km and is perched about 61 metres above the sea level. The town is famous for its One Horned Rhinos, Royal Bengal Tigers, Wild Elephants, Sambhar, Barking Deer, Spotted Deer, Wild Pig, Bisons, and a large number of Birds and peafowls. The sanctuary also houses Bengal florican, hornbill, racket-tailed drongo and paradise flycatcher, among others. Elephants and Safari Jeeps are available to tour the entire sanctuary.

Jaldapara was once the land of the primitive tribal people, called Toto. These people at present live in Totopara that lies in the northern side of the park. Jaldapara Wildlife Sanctuary was established in 1941 with the primary objective to protect the rare Great Indian One-Horned Rhinoceros. After Kaziranga, Jaldapara has the highest number of one-horned rhinos.

The Park remains closed from June through September due to heavy monsoon. October through May is the best time to visit the Jaldapara Wildlife Sanctuary. Tourists also visit this sanctuary during winters, between September and February, to catch a glimpse of the migratory birds.

It was declared a sanctuary in 1941 for protection of the great variety flora and fauna. Today, it has the largest population of Indian one horned rhinoceros in the state, an animal threatened with extinction, and is a Habitat management area. It is a national park situated at the foothills of Eastern Himalayas in Alipurduar Sub-Division of Jalpaiguri district in West Bengal and on the bank of river Torsa. Jaldapara is situated at an altitude of 61 m. and is spread across 216.51 km2 (83.59 sq mi) of vast grassland with patches of riverside forests.

The Britishers called it "the Mendabari ruins". After excavations at this place undertaken by the archaeological department have shown that these brick constructions belonged to the "Gupta Age". The chief attraction at Chilapata is the "Nalraja Garh". There exist the ruins of an old fort in the dense forests at Chilapata on the east bank of the Torsa river a few miles south of the Indo-Bhutan border. It is popularly called "Nal Rajar Garh". It was identified to be one of the frontier fortifications of the region then known as " Pundrabardhan Bhukti".

It is located at an altitude of 867 metres (2,844 ft) in the Buxa Tiger Reserve, Jalpaiguri district, West Bengal. It is located 30 kilometers (19 mi) from Alipurduar, the nearest town. It is suggested that the fort might have been first built either by the Tibetan Occupation Forces in the middle or in the second half of the seventh century or by Sangaldwip, the first ruler of Kamatapur. In subsequent times, the Koch kings had taken possession of the fort before it was seized by the Bhutanese in the second half of the eighteenth century.

It is a small forest village within Buxa Tiger Reserve in Jalpaiguri district of West Bengal, India. It is located along the Jayanti River, forming a natural border with the Bhutan hills. It is popular with hikers for its beautiful views of the surrounding landscape and wild fountains. The 13 km trek from Buxaduar to Jayanti is especially popular, passing through the dense forest of the Buxa Tiger Reserve. Jayanti also features a stalactite cave known as the Mahakal cave.

30 km from Jaldapara, a small village on the banks of River Torsha bordering Bhutan is the only habitation of Toto, a primitive tribe in Dooars. Their number has dwindled to less than 1000. The aboriginal lifestyle of the Totos attracts tourists from many parts of the world to visit here.

Forests on the eastern part of river Torsha is known as Chilapata forests. Hidden deep inside Chilapata is the ruin of a thousand-year-old fort of Nal King. It has tremendous historical and archaeological importance. Built in the 5th century during the Gupta Empire the ruins still recall the memories of the Golden Age of India. There are a number of forest safaris available in Chilapata as well which can easily be accessed from Jaldapara.

When the show of Tigers in Indian Circus was banned in 1998, many tigers were rescued and brought to this rescue center. Leopards captured from the whole of Dooars area also find shelter here. The Tiger Rescue center has a watchtower from where you can see the animals. There is also a battery operated small car which takes tourists on a ride inside the leopard area of the park. The rescue center is about 15 km from Jaldapara town.