The birthplace of Sri Krishna Chaitanya 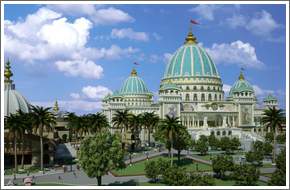 Mayapur a very holy and sacred place is located on the banks of the Ganges river. It is at the point of the confluence of Ganga with the Jalangi.

Mayapur Dham is one of the nine islands of Navadweep and is situated 130 km north of Kolkata. Krishna Devotees consider this place as pious as Mathura or Vrindavana. Mayapur holds a special place in the heart of the Gaudiya Vaishnaviites as it is the place where in 1486 AD.

Sri Chaitanya Mahaprabhu regarded as an incarnation of lord Krishna was born. Chants of Hare Krishna, reverberates the air of this place with devotees dancing and singing in ecstasy. The atmosphere here is very serene and fills your mind with peace. ISKCON(International Society for Krishna Consciousness established their centre in the 1970s thus transforming the whole place.

During Janmashtami, Dol yatra( Holi) and other festivals of the Vaishnava calendar Mayapur is thronged by a large number of visitors as well as devotees.

Being an important religious center, Mayapur has many temples dedicated to Vishnu and to other deities. The most important of all however is the beautiful Iskcon Temple also known as Sri Chaitanya Candrodaya Temple that attracts thousands of devotees and tourists from different parts of India and world. This is the first temple to be established by ISKON in Mayapur. This magnificent temple seen from quite a distance away has the deity of Radha Krishna along with the eight gopis. A magnificent deity of Lord Narasimha is also established here. There is also an exhibition section, depicting life and times Shree Chaitanya. The temple’s is open from 7.30am to 1pm and 4pm to 8.30pm.

After Srila Prabhupada’s death ISKCON decided to construct a temple as a tribute to its founder. The temple, the third one in the Chandrodaya complex, was opened to the devotees on February 1995. This samadhi mandir is just takes 2 minutes from the Chandrodaya temple. The temple houses a golden statue of Prabhupada in the centre.

Shree Chaitanyamath is in the place where Sri Chaitanya Mahaprabhu took birth. It is another big attraction in Mayapur. One can still see the neem tree, under which he is supposed to have been born. There is also a hut inside where Mahaprabhu grew up as a boy. The hut displays with the help of clay models his life. Besides the main temple of the math is also a big draw. Shree Chaitanyamath is around 3 kms from the Chandrodaya Mandir.

Being the oldest in group this brick - built Panchavimsati Ratna Temple was erected in 1739AD within an enclosed compound. There is a NATAMANDAPA in front of the temple and a mountain like temple known as Girigovardhana temple inside. The facades of the temple are also decorated with rich terracotta orientations.

Associated with the name of King Ballal Sena of Sena Dynasty this extensive mound has been excavated by the archaeological survey of India between 1982 - 83 and 1988 -89. Excavation has revealed a stupendous brick structure in an extensive yard, covered on all sides by enclosure walls, stucco heads, terracotta human and animal figurines, copper utensils and other objects, iron nails, etc. Have been found from excavation the upper remains are datable to 12th century AD built over earlier structures of 8th - 9th century AD. There are traces of renovation and superimposition of structures the later activities revealing remains of a temple complex datable to 12th century AD.

Built by Maharaja Teja Chandra Bahadur in 1809 AD these atchala brick temples are made out of auspicious numerical combination in two concentric circles and dedicated to Shiva. The outer circle contains 74 temples and inner circle has 34 temples. The temples represent beads in a rosary symbolically. 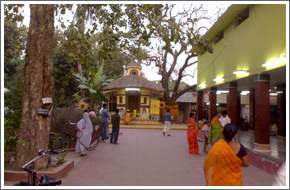 Nabadwip lies on the western side of the river Bhagirathi at a distance of about 20 K.M. from Krishnagar and it is associated with birth of Lord Sri. Chaitanya and the advent of the Vaishnab religion in Bengal. Sri. Chaitanya was not only a religious leader preaching Vaishnab ideas and Bhakti cult but also a social reformer in the 16th Century. Nabadwip was the capital of Lakshman Sena, the famous ruler of Sena dynasty, who ruled from 1179 to 1203. There are a number of temples and pilgrimage centers. Dwadas Shib Mandir built in 1835 with the exquisite floral designs attracts a large number of pilgrims. The images and idols of Lord Sri. Chaitanaya in a few other places are also regarded with reverence.