The "Cultural Capital" of India 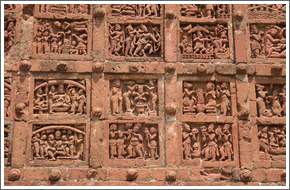 Shantiniketan is a small town near Bolpur in the Birbhum District of West Bengal and about 212 kms north of Kolkata. It is famous due to Nobel laureate Rabindranath Tagore, whose vision became what is now a University town - Visva-Bharati University. The place now attracts thousands of visitors each year.

Shantiniketan was earlier called Bhubandanga (named after Bhuban Dakat, a local Dacoit), and was owned by the Tagore family. In 1862, Maharishi Devendranath Tagore, the poet’s father, while on a boat journey to Raipur, came across a landscape with red soil and lush green paddy fields. He decided to plant more saplings and built a small house. He called his home Shantiniketan. He founded an ashram here in 1863 and became the initiator of the Bramho Samaj.

In 1901, Rabindranath started a school at Shantiniketan named Bramhachari Ashram that was modeled on the lines of the ancient Gurukul system that later came to be known as the Patha Bhavan, the school of his ideals, with central premise that learning in a natural environment would be more enjoyable and fruitful. With the financial backing of the Maharajah of Tripura, the Visva-Bharati Society was established in 1921. Tagore envisioned a center of learning which would have the best of both the east and the west. Nobel Prize (1913) won by Rabindranath Tagore, not only the enhanced the pride of India but also the prestige of Shantiniketan. The school was expanded into a University. It was named Visva-Bharati, which was defined by Tagore as ‘Where the world makes a home in a nest.” The Open-air education as opposed to being cloistered in the four walls of a classroom became a reality here. Eminent people from all over the world came to Visva-Bharati during its peak period. Visva-Bharati became a Central University in 1951. Leaves of the Chhatim (Saptaparni – or 7-leaf sprigs) trees are given to graduating students at the annual convocation. Many world famous teachers have become associated with it over the years. Indira Gandhi, Satyajit Ray, and Amartya Sen are among its illustrious students. The Prime Minister of India is the Chancellor of the University.

Shantiniketan is also home to Amartya Sen, the 1998 Nobel Prize winner in Economics.

Shantiniketan is adorned by splendid sculptures, frescoes, murals and paintings of Rabindranath, Nandalal Bose, Ramkinkar, Binod Bihari Mukhopadhaya and others.

Here Maharshi Devendranath, the father of Rabindranath Tagore, used to meditate. Prayers are held usually at Convocation time. Successful graduates of the Vishwa Bharati University are presented a branch of five leaves each from the Saptaparni trees which abound in the area.

The art college of Santiniketan, is still considered one of the best art colleges in the world. The College of Fine Arts & Crafts has a museum exhibiting sculptures, frescoes & murals and a library of art books.

A secondary school, it is of particular interest as an example of the traditional `Brahmacharya Ashram'.

Founded by the poet's father in 1863, the hall is made of glass. Prayers are held on Wednesday.

Also called Rabindra Bhavan, a Research Centre and Museum where the poet's personal belongings, paintings & various editions of his works are exhibited.

College of Dance and Music. The University is replete with works on Art, Music and the Humanities.

The poet lived and worked in the Northern Complex consisting of several buildings as : Udayana, Konarka, Shyamali, Punascha and Udichi. The Bichitra ( or, Rabindra Bhavan ) designed by the poet's son Rathindranath Tagore.

Varshamangal - Varshamangal, the festival of rains, is celebrated during August/September.

Poush Utsav - Time : December - Poush Mela or Utsav is an annual fair and festival that takes place in Shantiniketan, marking the harvest season. Commencing on the 7th day of the month of Poush(January), the fair officially lasts for three days, although vendors may stay up until the month-end. The key characteristic of this fair include live performances of Bengali folk music, notably baul music. At Tagore's behest, the annual Poush utsav became an important cultural event where students and teachers of his school took an active part. Poush Mela, therefore, becomes a meeting ground for urban people and rural folk. Rural artisans bring their wares like batik printed materials, the famous Shantiniketan leather bags, earthen wares, paintings, etc, to the fair. Urban salesmen set up stalls from where rural people buy goods industrially produced in the cities.

Background : Devendranath Tagore with twenty followers accepted the Brahmo creed from Ram Chandra Vidyabagish on 21 December 1843 (7 Poush 1250 according to the Bengali calendar). This was the basis of Poush Utsav (the Festival of Poush) at Shantiniketan.

A Brahma mandir was established at Shantiniketan on 21 December 1891 (7 Poush 1298 according to the Bengali calendar). A small fair was organized in 1894 in connection with the establishment anniversary of the Brahma mandir, in the ground opposite the mandir. What started as a small homely Poush Mela now attracts attention of not only the people of Birbhum district but tourists from all around.

In earlier days the mela (fair) was held in the ground on the north side of Brahma mandir (also referred to as glass temple). On that day, a firework display was held after evening prayers. As the mela increased in size, it was shifted to the field in Purbapalli.

Inauguration : Poush Utsav is inaugurated on 7th Poush (around 23 December). At dawn, Shantiniketan wakes up to the soft music of shehnai. The first to enter the scenario is the Vaitalik group, who go round the ashrama (hermitage) singing songs. It is followed by a prayer-meeting at Chhatimtala. Then the entire congregation moves on to Uttarayan singing songs.

Other days : Poush Mela is characterized by the live performances of Bengali folk music, especially the baul music. It includes folk songs, dances and tribal sports. This fair offers a perfect insight of true heritage of the state. The students of Shantiniketan present their magnificent performance and make this festival more enjoyable and glamorous. Each day of this festival is filled with different activities. The last day of this fair is devoted to those who are related to Shantiniketan.

The Fair : Some 1,500 stalls take part in the fair. The number of tourists pouring in for the three day fair is around 10,000. Government statistics put the daily inflow of tourists in to Shantiniketan at around 3,500 per day; but during major festivals such as Poush Utsav, Basanta Utsav, Rabindra Paksha, and Naba Barsha it goes up to an average 40,000 per day or more. Shantiniketan has 85 lodges with accommodation for 1,650. Besides this, rooms can be rented as well.

Souvenir : Local printed fabrics and handicrafts are available in the stalls erected during the fair.

Maghotsav is celebrated with traditional fervour and gaiety by Brahmos all over the world. It is celebrated by prayers and singing of devotional hymns. In Calcutta, which is now the main seat of Brahmoism week long celebrations are carried out in the 3 principal Samajes. Food is also provided at the Samajes on the special days of the celebrations. The food is traditional and consists of khichudi, mixture of rice and lentil, along with mixed vegetables and chutney. After the celebrations the focus shifts to the provincial Samajes scattered all over Bengal.

Maghotsav is also celebrated in other Brahmo Samajes in India and the Brahmo educational institutions as well and in Tagore's Shantiniketan. However these are a day celebration rather than weeklong.

Joydev Mela - Jaydev Kenduli is a village and gram panchayat in Ilambazar community development block in Bolpur subdivision of Birbhum District. Until recently, some believed it to be the birthplace of Jayadeva. Jaydev Kenduli has developed as a religious centre with many temples and ashramas (hermitages). On the occasion of Makar Sankranti an annual fair is organized, which is also popularly known as Baul Fair.

History - Jaydev Kenduli had long been considered as a possible birthplace of the poet Jayadeva, who had composed Gita Govinda in Sanskrit. However, now there appears to be a consensus among scholars that Jayadeva was born in another place in Orissa bearing the same name, in Kenduli Sasan. He was popularly believed to be the court poet of Raja Lakshman Sen, who ruled in the 12th–13th century. The image of Radhamadhav set up by him is daily worshipped. The asana (mat) on which the poet sat and obtained siddhi (salvation) through meditation is carefully preserved.

During the Mughal era Jaydev Kenduli was part of Senpahari pargana. As per a firman issued by Aurangzeb in the 17th century, Senpahari was added to the property of Krishnaram Rai of Bardhaman Raj. Maharani Brajakishori of Bardhaman had set up temples in different places such as Puri and Vrindaban. Jugal Kishore Mukhopadhyay of Jaydev Kenduli was then court-poet at Bardhaman. It is said that it was at his request that the Maharani set up the Radhabinod temple at Jaydev Kenduli in 1683. The temple stands where the house of the poet Jayadeva, was believed locally to have stood, based on the prior assumption of his birth there. Around 1860-70, Radharaman Brajabasi of the Nirbak Vaisnava sect set up the Nirbak Ashrama at Jaydev Kenduli, the place of birth of their kula guru (patron saint) of the sect, the poet Jayadeva.In the first half of the 20th century, the Radhaballav temple of the Mukhopadhyay family was established. Many more ashramas (hermitages) were set up and thus Jaydev Kenduli developed as a religious centre.

Fair - A fair is organized in memory of Jayadeva on the occasion of Poush Sankranti or Makar Sankranti. It starts on the last day of the Bengali calendar month, Poush and continues up to 2 Magh. The start of the fair commemorates the auspicious day on which Jayadeva is claimed to have taken a bath at the Kadaambokhandi ghat of the Ajay river at Jaydev Kenduli. In 1982, the district authorities took control of the fair to provide a better environment, a good sanitation system, drinking water, lighting and security.

Several thousand bauls, a community of wandering minstrels who sing devotional songs to the music of the ektara (one stringed instrument), assemble for the fair and as such it is also referred to as Baul Fair. The bauls stay in 160 temporary hermitages at Jaydev Kenduli for around a month. These bauls appear to have inherited the legacy of Jayadeva songs.

However, in recent years, the greatest baul fair in the state is gradually losing its character, as the bauls have been outnumbered by kirtanias, who perform in the mela to gain popularity. In 2008, around 2,000 kirtanias came to attend the mela and they obtained contracts worth Rs. 2 crore.

It is not known whether Rabindranath Tagore ever visited Jaydev Kenduli. However, many personalities linked with Santiniketan such as Kshiti Mohan Sen, Nandalal Bose, Provat Kumar Mukhopadhyay, Ramkinkar Baij, and Santideb Ghosh visited Jaydev Kenduli and contributed substantially towards the spread of its name outside Birbhum and added to its fame.

The fair, which is believed by some to have been there for around centuries, caters primarily to the requirements of village folk. Everything from cooking utensils to fishing nets are sold in the fair.

Vasanta Utsav - Time : March - An annual Bengali festival Dol which was named as Vasanta Utsav by Gurudev (Rabindranath Tagore) , Vasanta Utsav heralds the coming of spring season and is an integral part of the Bengali culture. Rabindranath introduced this lovely occasion as an annual event in his Bishwabharati University in Shantiniketan (West Bengal, India). Every year, the students and the youths of the institution, attired in colorful dresses like yellow (Basanti Colour in Bengali), celebrate Holi in a very special way. A number of cultural programs, including group choreography, songs and dance performances, are staged.

Since its inception, Vasanta Utsav has become a milestone of Bengali history and has also captured international interest that is proved by the presence of numerous foreign tourists during its celebration.