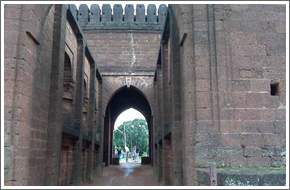 Once known as Mallabhum or the Land of Wrestlers, Bishnupur abounds in legends of heroic kings, who are remembered as much for their exploits as for their patronage of art and architecture.

Bishnupur lies just 151km away from Kolkata. This town of terracotta temples and man-made lakes is proof of the Malla rulers of 16th century. Since Bishnupur had no stone for construction, the Malla kings built terracotta temples to celebrate their love for Krishna. Terracotta tiles carve out stories from the Ramayana and Mahabharata.

The spectacular terracotta temples of Bishnupur are the pride of Bengal.

There are atleast 32 temples that are considered note worthy in Bishnupur, out of which 22 are under the crotection of the ASI. Stylistically, these can be classified into three types : duel, chala, ratna. 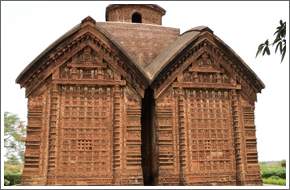 Built in 1665, Jor Bangla Temple is the finest example of Bishnupur architecture. It is richly decorated with exquisite terracotta panels in the facade of the porch and the three other sides. These depicts scenes from the epics, episodes from the Krishnalila and the scenes from daily life, with the breathtaking details. The celestial kinnaras and gandharvas are shown in postures just as dynamic as mortal beings.

Kalachand Temple is the earliest example of ek ratna style of architecture. Built in 1656 AD by the Malla King Raghunath Singha as evidenced from the dedicatory inscription on the southern facade it stands on a square platform and the shrine is surmounted by a sikhara on a sloping roof. The frontal facade contains bas - reliefs depicting scenes from Krishnalila, Puranas and contemporary life. These bas-reliefs were originally applied with stucco remnants of which can still be seen.

This south facing laterite ek ratna temple was built in 1737 AD by Chudamonidevi, wife of Malla king Krishna Singha as evidenced from the dedicatory inscription on the frontal facade. It is square on the plan and stands on a raised platform. The shrine is surmounted by a Shikara above the sloping roof. The frontal facade of the temple is elaborately carved with bas- reliefs containing scenes like Krishnalila, Dasavatara, etc. which were originally applied with stucco. On the western side of the temple lies a Dochala Mandapa, which is supposed to be the only example of its kind at Bishnupur.

This brick built shrine built by Bir Hambir in 1600 AD, is a unique struture standing on a spacious square plinth, topped by a pyramidal roof. The sanctum of the shrine is enclosed by three successive circumambulatory galleries approached through a series of arches capped by chala motifs. On its eastern face are decorative terracotta panels depicting dancers and singers, and floral motifs. In the days of the Mallas all the idols worshipped in Bishnupur temples were exhibited here during the annual Rasa festival.

Shyamrai Temple or Pancha Ratna Temple of Shyam Rai - Built in 1643 by King Raghunath Singha. The walls are richly decorated with terracotta carvings featuring aspects of Lord Krishna’s life. It is one of the largest temples. A massive structure carrying a char chala with five towers, this temple measures 11.4m on each sides and rises to a height of 10.7m. Terracotta ormentations adorn the temple both on the inside and outside. An iscription on the main entrance reads that the temple was 'built for the [pleasure of Shri Radhika and Shri Krishna'. 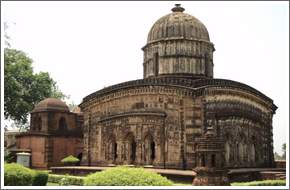 King Durjana Singh Deva built the temple in 1694 AD in the ekaratna style, a square flat-roofed building with carved cornices, surmounted by a pinnacle. Impressive carvings on the walls depict scenes from the Ramayana, Mahabharata and the Puranas. 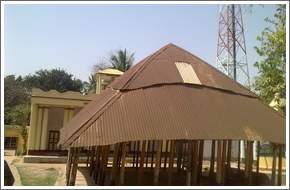 Jairambati is a prime religious destination in Vishnupur in Bankura district of West Bengal State. It is the village in which Sri Ramkrishna, the great saint of India, spent his many years. The annual festival associated with the birthday of Sri Ramakrishna is a prime celebration in this village.

Saradadevi, revered incarnation of Goddess Lakshmi and spiritual life partner of the sage Sri Ramakrishna Pramamhamsa, was born in 1853 AD in this small hamlet. It is said that after the birth of Saradadevi, known as Holy Mother, the land became very fertile and showed prosperity. This place has grown to a revered holy destination for the pilgrims from all over the world. This village has many temples and historical houses in which Saradadevi spent her childhood and the rest of life. 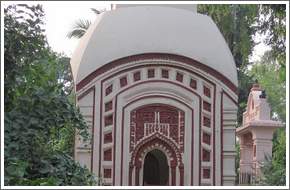 The village is adorned with naturally charming environment and ambiance. The picturesque village is surrounded by lush green trees and shrubs, mesmerizing landscapes and meadows and has fantastic rural atmosphere. The region is known for fertile lands and the nearby rivulet Amodar is very attractive for the travelers. Agriculture is the main source of income in Jairambati.

The serene big lake known as “Mother Tank” in this village is a source of irrigation, bathing and other purposes. People use this lake for refreshing themselves. Banerji’s Tank, also called 'Barunjjey Pukur', is another water tank in this village. This tank is surrounded by eye catching view.