The Queen of the Hills 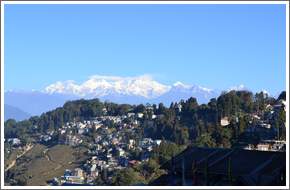 Standing high in the Himalayas at an altitude of 2134m, ‘Dorje Ling’, or place of the Thunderbolt, offers breathtaking views of snow-capped mountain peaks, with the Kanchendzonga rising higher than all the others. Often referred to as the “Queen of the Hills”, it remains just as alluring with its tiny waterfalls, little villages and a narrow gauge railway track. Surrounded by World Famous Tea Gardens and snow capped mountains, Darjeeling remains one of the most exotic destinations. Graeme Westlake in his book ‘An introduction to hill stations on India’ refers to Darjeeling as having “A view Scarcely Unrivalled on Earth”.

It is 13 kms from Darjeeling and one can see beautiful sunrise and Himalayan Range like Kanchandzonga, Mount Everest etc. One can see the horizon changing colors just before sunrise and then the entire Himalayan range turn golden. It is truly a majestic sight.

The Batasia Loop was created to lower the gradient of ascent of the Darjeeling Himalayan Railway in Darjeeling district of West Bengal, India. At this point, the track spirals around over itself through a tunnel and over a hilltop. It was commissioned in 1919. There is also a memorial to the Gorkha soldiers of the Indian Army who sacrificed their lives after the Indian Independence in 1947. From the Batasia Loop one can get a panoramic view of Darjeeling town with the Kanchenjunga and other snowy mountains in the back-drop. 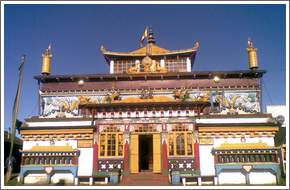 Ghoom Monastery is the popular name of the Yiga Choeling Monastery located at Ghoom at an elevation of 8,000 feet, 8 km from Darjeeling in the state of West Bengal. The monastery belongs to the Gelukpa or the Yellow Hat sect and is famous for its 15 feet high special statue of the Maitreya Buddha. The external structure of the building was established in 1850 by the famous Mongolian astrologer and monk Sokpo Sherab Gyatso. Since 1850 to 1905 he had administered as the head of the monastery. 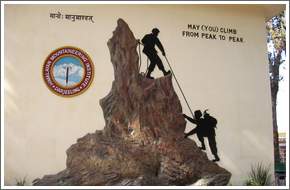 The Tibetan Refugee Self Help Centre was started on October 2, 1959. At that time, following the dramatic escape of His Holiness The Dalai Lama, thousands of our fellow countrymen, leaving hearth and home, fled into the neighboring countries to live as free human beings. The overwhelming majority of the refugees had brought nothing with them apart from the clothes they wore and what little provisions they could carry with them as they began the long and difficult trek over the Himalayas

Lloyd Botanical Garden stands in the memory of a resident of Darjeeling, Mr. William. In 1878, he made over a beautiful piece of land to facilitate the creation of a botanical garden. Initiated as a branch of the Royal Botanical Garden, Kolkata, the garden is situated at an altitude of 1800 meters.

The garden represents the characteristic flora of the Eastern Himalayas. Sir John Anderson Rock Garden of this garden is where many alpine and sub-alpine plants grow under conditions akin to their natural habitats. More than 60 orchids representing various terrestrial and epiphytic species are found in the Orchid House, a spacious glass house.

A herbarium, which is a stone building built in Elizabethan style, is also present here. Living fossil plants are another attraction. 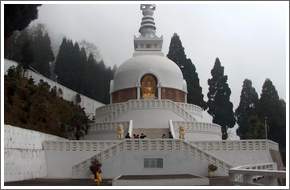 Peace Pagoda, Darjeeling or Darjeeling Peace Pagoda is one of the Peace Pagodas designed to provide a focus for people of all races and creeds to help unite them in their search for world peace. It is located in the town of Darjeeling in the Indian state of West Bengal. Like most of the other Peace Pagodas, it was built under the guidance of Nichidatsu Fujii (1885–1985), a Buddhist monk from Japan and founder of the Nipponzan-Myōhōji Buddhist Order.

The foundation stone of the pagoda was laid on 3 November 1972 by Nichidatsu Fujii, and was inaugurated on 1 November 1992. The pagoda was designed by M. Ohka, and it took 36 months for constructing it. The height of the pagoda is 28.5 metres (94 ft) and diameter is 23 metres (75 ft). 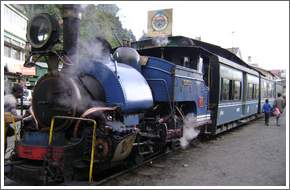 The spectacular landscape unfolds as the 2-foot gauge Darjeeling Himalayan railway, opened in 1881, labours at about 10 mph criss-crossing the road. It has tiny 4-wheel locomotives (some over 100 years old) like living legends. One can experience the sound, smell and romance of a bygone era. DHR is a work of genius and technological achievement of 1881. It has social and cultural importance. It is beautiful and has outstanding universal appeal. Based on its unique features, it is considered to be of lasting significance to mankind.

This garden was built in 1998 by Mr.Subhash Ghishing . It is natural Rock Garden and water falls. A little below the rock garden is the Gangamaya Lake which is artificial and boating can be done here.

Situated about 4 km from the Market Square and on the National Highway, Ava.Art Gallery was established in 1965 by the Late. Bhopal Rao Sett and Ava Devi. It is the only Art Gallery of its kind in the Hills. A collection of 60 pieces of art work in water, oil and thread paintings are displayed in the Gallery.

Darjeeling-Rangit Valley Passenger Cable Car is popularly known as the Ropeway. It is about 3 km north of the town and situated at what is known as the North Point. The Ropeway is India's oldest passenger ropeway and connects Darjeeling with Singla Bazaar at the bottom of the valley. The present ropeway has been extensively modernized and visitors can now safely travel over the clouds to witness the aerial view of the lush green tea gardens below.

Situated on the Old Military Road commonly known as the Aloobari road, the Mag-Dhog Yolmowa Buddhist Monastery was founded by its, Ven. Sangay Lama, the head priest who originally hailed from Nepal. The construction of the monastery, coincided with the beginning of the First World War in 1914. The monastery was therefore named Mag-Dhog or warding off the war and is dedicated to the cause of world peace. The statues of Lord Buddha depicting different forms and the statue of Padma Sambhave at this religious place are stunning. The painting on the wall are said to be done with the help of herbs and are an amazing work of art. Other interesting features of the monastery are the valuaable ancient scriptures lying inside the monastery.

This monastery is situated at Dali, about 4 kms away from Darjeeling town. This is one of the most famous monasteries belonging to the Kargyupa sect. The pioneer of this monastery was Thuksay Rimpoche, who died in 1983 and his incarnate is reported to have been born in 1986 at Ladakh. This monastery is the headquarters of Drukchen Rimpoche XII, the supreme head of the Kargyupa lineage.

The architectural splender of Dhirdam Temple is near resembles to the famous temple of Lord Shiva, “ Pashupatinath Temple”, in Kathmandu, Nepal. This Pagoda style temple is built with gold and silver and exhibit the height of architectural and artistic excellence by the artists.

Dhirdam Temple was built in 1939 with the superb architectural manifestation by Beg Raj Sakya and constructed by Raj Saheb Purna Bahadur Pradhan. Tibetan influence is seen in the Lord Shiva’s statue which is established just outside the main temple depicts "Panch Bakram Tri Netram", meaning five different facial expression of Lord Shiva in different mood and the third eye.

The temple is located near the Darjeeling Railway Station. The divine feeling and spiritual atmosphere of the temple makes the visitor to feel deep immersion into one self.

Observatory Hill is a hill near Chowrasta square, or The Mall as it is popularly known, in Darjeeling, West Bengal, India. Magnificent views of snow-clad peaks, including Mount Kanchenjunga are visible from Observatory Hill. The Bhutia Busty monastery was originally located here. Now the hill has the temple of Mahakala. Two important arteries of the town, Nehru Road and Bhanubhakta Sarani, meet at Chowrasta.

Rising abruptly from Chowrasta is the hill-top. Situated atop is the ancient temple of Mahakal, a cave sacred to worshippers of Shiva. In Sanskrit, the word 'Durjay Ling', means 'Shiva of invincible prowess, who rules the Himalayas.' There is a suggestion that the name Darjeeling could have emanated from this name. The place where the Mahakal Temple stands was once occupied by a Buddhist monastery. It is still a place of great sanctity for the Bhutias. Bells ring in the midst of fluttering flags, which are used to pray in the shrine. However, one has to be a bit wary of the mischievous monkeys teeming at Observatory Hill.

Bhutia Busty monastery or Karmaa Dorjee Chyoling monastery is a Buddhist monastery located in Darjeeling, India. It belongs to the Red Sect of Buddhist Lamas. Originally a branch of the Nygmapa sect's Phodang Monastery in Sikkim, it was transferred to Darjeeling in 1879. The original location was on the Observatory Hill. It was destroyed by a Nepalese invasion in the 19th century. The monastery relocated to its present location. However, the monastery in new location was also destroyed in an earthquake in 1934. Chogyal of Sikkim helped rebuilding it. The monastery has a collection of old Buddhist scripts.

Apart from its unmatched natural beauty Darjeeling is famous for Tea, which is hailed one of the best flavored tea in the world. Tukvar and Happy Valley Tea Estates, are among the oldest and renowned tea gardens in Darjeeling. In these tea gardens visitors can get a rare experience of watching the manufacturing and processing.

The Bengal Natural History Museum is near Chowrashtra, the heart of Darjeeling. The museum contains a representative and comprehensive, but dusty, collection of Himalayan and Bengali fauna. The museum houses more than 4300 specimens. Bird species, reptiles, and other animals of the Eastern Himalayas are displayed at true to life altitudes.

The butterfly and beetle section merits special mention. Specimens of estuarine crocodile, which is responsible for the greatest loss of human life in Asia, are also seen here. Mineral forms of various stones are attractively displayed.

The museum is open on all days except Thursdays, and is open between 10 am and 4 pm.