Explore its Magnificent Palace and Surroundings 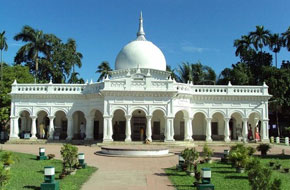 Until the transfer of control to India by the British in 1949, Koch Behar was a princely state which merged with the Union of India and later became a part of West Bengal state. Among the tourist attractions in Cooch Behar, what strikes first in our mind is the Rajbari or the palace of the Kings and the adjoining royal buildings as well as the endless royal facts & stories. In fact, being the place of the Raj (monarchy), the district captures the bygone glorious past in the moods of local people even today. The peace loving people of Cooch Behar even boast of this beautiful city where the Maharajas (kings) used to stay and never tires, if not laments in excitement, narrating the Raj stories. Cooch Behar is a closely knit small town with happy people who are proud of the cultural richness and heritage of their city.

Rajbari or the Cooch Behar Palace is located in the city of Cooch Behar in the East-Indian state of West Bengal. Rajbari is also known as Victor Jubilee Palace and is considered of great historical importance in the country. The palace belongs to the Mantris and is a grand structure that drips elegance from every corner, inside and the outside. Visitors will be awestruck right from the moment they see the fabulous building several feet away from the Facade.

Built during 1885-1887 by Maharaja Nripendra Narayan, this temple is beautifully designed and enjoys a huge following. The temple enshrines deities like Madan Mohan, Tara Ma, Kali Ma and Ma Bhawani. On the occasion of Rash Purnima, the temple celebrates Rash mela and Rash Yatra, one of the most celebrated occasions of North Bengal.

It is a Huge pond situated in the heart of the city, Sagardighi was excavated by Maharaja Hitendra Narayan. The tank has heritage hotels, Victor House and a War Memorial around it. Tourists find it rather interesting to take a stroll down the gallery.

Located at a distance of 10km from the centre of the city, the temple homes a Shivalinga which is 10ft below the plinth level. The temple also has a statue of Arthanarishwar. During the occasion of Madan chaturdashi and Dol Purnima, the deity are carried to the Madan Mohan Temple in a celebrated procession. The premises have a huge pond which houses large number of tortoises, very old in age and form.