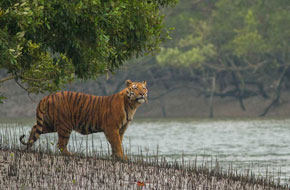 Shared between India and Bangladesh, the Sundarbans meaning beautiful forest, have been declared a UNESCO heritage site. This area has a silent charm that manages to amaze one with the simplicity and naturalness of its ecological balance in spite of offering habitat to some of the most dynamic and awe-inspiring flora and fauna. The endangered species that lives within the Sundarbans are royal Bengal tiger, saltwater crocodile, river terrapin, olive ridley turtle, Ganges River dolphin, hawksbill turtle and mangrove horseshoe crab.

Sundarbans is a National Park located in West Bengal, India. It is also a Tiger Reserve and a Biosphere reserve that provides a complete nature's circle to the tourist right from 'Royal Bengal tigers' to roaring rivers and beautiful estuaries. Sundarbans National Park is a part of Sundarban delta that is covered with Mangrove Forest and the largest population of the Bengal Tigers. It is a UNESCO world heritage site with a large variety of birds and reptiles including salt-water crocodile.

Wrapped in the commotion of West Bengal and yet a world in itself, Bakkhali is small beach town located on the West Bengal coast. If you wish to have the perfect beach getaway that doesn't include ear ripping music or just alcohol laden evenings, Bakkhali is the place to be. Beach walks, wind farms, boat rides, islands, cycle rides around town. Bakkhali is the perfect place for an exotic getaway right here.

Digha is a one-stop destination for families looking forward to spend a pleasurable weekend. One of the best features of this hamlet is its varied and diverse tourist attraction spots. Known for its magnificent beaches, religious temples and high-tech research centers and museums, this most popular sea resort of West Bengal has a lot to offer for people of all age groups. Digha's sceneries can also offer you the pleasure experienced in witnessing areas that have minimal human impact and are relatively untouched.

The City of Joy provides all kind of leisure for you to explore. It is one of the most populated cities and is also famous for many offerings from its colonial structures to its own culture that has blended into their everyday life. Formerly the capital of the British Empire before the government was shifted to Delhi. If you want to soak in some of the city's regal past, take a walk along the streets of North Kolkata, which houses some of the oldest mansions in the city. Kolkata is home to Rabindranath Tagore's ancestral house, which has now been converted into a museum and houses a staggering collection of family portraits and paintings.

Sagardwip is a small island, a part of the Sunderbans group of islands. Sagardwip is at the confluence of the holy river Ganga (Ganges) and the Bay of Bengal, making it one of the most popular religious havens of the country. There are numerous legends attached to the Ganga and its origin on Earth. Due to its religious connotations, Ganga is one of the most sacred rivers in the world.

There are secret beaches, beaches which are beyond the reach of contamination, beaches that refresh our senses and Talasari is one such place. This virgin beach has sand dunes, calmer waves amid several palm trees, coconut trees, cashew trees known to be the last beach on the north eastern coast of India. Talasari gets its name from Tala (rhythm) and Sari (row)- the rhythm formed by a well arrayed lush green belt and golden sands with an occasional red fleck (thanks to the red crabs ambling around) meeting the enormous sea, which is almost melodious. Being a fisherman's paradise, Talasari doesn't experience much tourist rush.