Famous for magnificent views of the snow-capped Kanchenjunga range 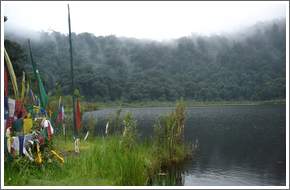 Pelling is a small town that is situated in the state of Sikkim in the West Sikkim region. The town is a laid back place and it attracts travelers from different parts of the country. Pelling is located near the foothills of Kanchenjunga and one can witness an outstanding view of the mountain from here. There are numerous scenic spots that one can visit in the area. The main attractions in the place are the monasteries that dot the countryside. Visiting these tranquil monasteries is a good way to spend time in the region. Some of the main places are Pemayansgtse Monastery and Sangachoeling Monastery. There are many sculptures and paintings that you can find in these places and they are not crowded. One can get a panoramic view from the Sangachoeling Monastery. If you are visiting during the month of January, you can see a dance called Cham in the Pemayansgtse Monastery. 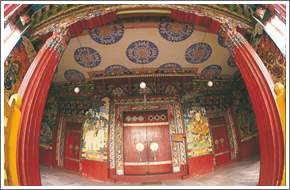 Pemayangtse Monastery is one of the oldest monasteries in the State. Originally established by Lhatsun Chempo, one of the revered Lamas to have performed the consecration ceremony of the first Chogyal ( Religious Monarch) of Sikkim. This ancient monastery belongs to the Nyingma Buddhism and has been considered as one of the premier monasteries in the State, having been entrusted with the task to perform all religious functions of the erstwhile monarch. The Monastery, located on a hill top at an altitude of 6840 ft. commands a magnificent panoramic view of the Himalayan ranges and the surrounding hills and country-side. 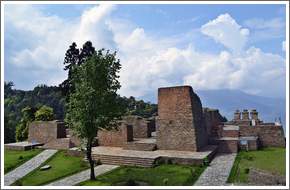 This was the second capital of the erstwhile Kingdom of Sikkim after Yuksom and till the year 1814 AD, the Kings of Sikkim had ruled the State from this place. Today, the ruins lie hidden from the main road at a walking distance from the Pemayangtse Monastery. The scenic view from the top of the ruins scanning across the deep valley to the mystic heights of Khangchendzonga ranges is something to be cherished and etched in memory. 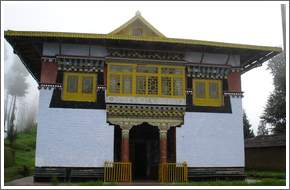 This monastery is situated on a ridge above Pelling and the famous Pemayangtse Monastery. Built in 1697 AD, it is considered to be the oldest monasteries in Sikkim. In order to reach this Monastery one has to be prepared to spend at least 40 minutes walking up the steep hilly slope which leads through rich forest covers. 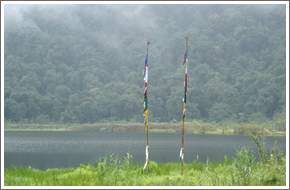 Khecheopalri Lake is considered to be one of the sacred lakes of Sikkim both by the Buddhist and the Hindus. The lake remains hidden in the rich forest cover. It is believed that birds do not permit even a single leaf to float on the lake surface. There is a motorable road from Pemayangtse right up to the lake area.

For those interested in spending a night or two in the peaceful environment a trekker's hut has been provided by the Tourism Department. The hut is presently managed by a local person and provides comfortable stay providing a taste of local Sikkimese -Nepalese cuisines. There is also a pilgrim's hut, managed by Tourism Department, which is meant to provide accommodation to the people who come on pilgrimage tours. 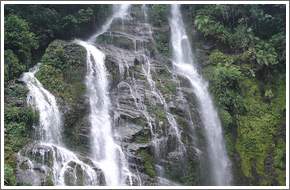 Located between Yuksom and Gerethang this highest waterfall of West Sikkim presents a magnificent scenario especially during Monsoon. A gentle gradient footpath takes one to a viewpoint for a closer view of this mighty discharge of water. A cafeteria is being constructed for the benefit of tourists and the picnickers.

Water falls is spectacular in summer that attract many falls lovers, The power station by name Karchen Power house is the oldest in west Sikkim which was made in early 70s during the last kings government which successfully supplied energy to the most villages and towns of West Sikkim including Gazing ,Tigjuck and Pelling. River is beautiful and breath taking. But it is only in the winter when river water decreases and becomes gentle the tourists with families go right inside the river bank and enjoy river and local children are found doing sweepings during . Fishing is common activity of the locals all through the year.

Sewaro rock Garden developed by the Tourism and CIvil Aviation Department of Sikkim with facilities like gardens, pools, zigzag foot path and interesting recreation amenities like swimming pool, viewpoints and cafeteria. This has now come up as one of the popular picnic spot for the locals in Sikkim where many local picnic parties arrive here in winter. On the other side is village inhabited by local people from mixed communities and schools with beautiful children. 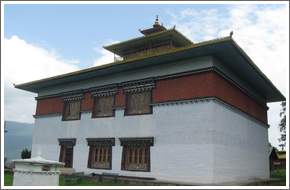 This monastery is constructed on top of a heart shaped hill with the back drop of the sacred Mt. Khangchendzonga. According to Buddhist scriptures Guru Padmasambhava, blessed the sacred land of Sikkim in the 8th century AD from this spot. The monastery, however, was built in the 18th Century AD by Ngadak Sempa Chempo, one of the three Lamas who had performed the consecration ceremony of the first Chogyal.

Tashiding is also famous for the most holy Chorten known as 'Thong-WaRang-Dol' which literally means 'Saviours by mere sight'. It is believed that the mere act of beholding it is supposed to wash away all the sins of the devotees. Another important feature is the sacred water festival unique to this monastery only. Every year, on 14th and 15th day of the first Lunar month, the Bhumchu Ceremony is organised with devotees coming from far and near to get the blessing of the holy water. The sacred holy water is officially sealed for safety by the lamas of the Monastery. It is taken out once a year on an auspicious occasion, only to be put back with some fresh additions. 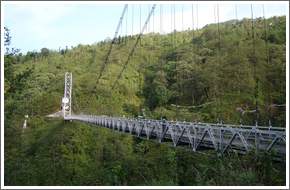 With a span of 198 m and 220 m in depth, located in the mid-way to Uttarey from Dentam, “Shingshore Bridge” is the Second Highest Suspension Bridge in Asia, and the first of its kind in Sikkim as well as in the country India, which has been a unique and a new tourist destination. Connecting Dentam to Uttarey in the distance, it connects the two beautiful villages where homestay facilities are available-

With the participation of the mass local public and the NGOs under the approval of the government, “Singshore Bridge” has been specified and declared as a special spot for the “BUNGEE JUMPING,” introducing and promoting a unique and a new discipline in the field of adventure tourism as the FIRST in the State. 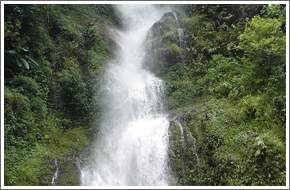 Artistically cascading from the height of nearly 300m,Twin Chhangay Waterfall is one of the most beautiful water falls in West Sikkim on the way to Uttarey from Pelling. Easily approachable or located on the road bank, Chhangay fall has become one of the important tourist destinations for visitors. The fall flows down from Ranidhunga through Chhangay village. Chhangay falls is surrounded by Chhangay, Sapung and Bongten villages. The extreme white of the fall actually looks like a long white mark on the green background of forest, if seen from the distance, a breathtaking sight for the visitors.

About half an hour drive from Hee Village towards Uttarey is the attractive village and bazar of Dentam with a bird-eye view from Gurasey Danra (Rhododendron forest). The name Dentam comes from the word ‘TEN-NEM’, which means a flat terraced land in the Limboo language. This valley is located in a very unique topography. One ancient and a holy “Jlpa Devi Mandir” and “Durga Mandir” including one “Shiva Mandir” are there in the heart of Dentam Bazaar to guard and bless the people in the nature of a perennial source of water. This beautiful valley is famous for the Alpine Gouda Cheese Factory, a product of Indo-Swiss collaboration. 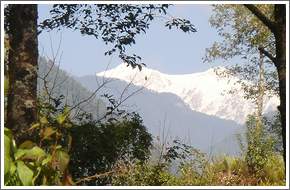 Yuksom was the first capital of Sikkim. It was consecrated in 1642 after three venerated Lamas who came from the north, west, and south to Yuksom and consecrated Phuntsog Namgyal as the first Chogyal (religious king) of Sikkim. There is a place called the Coronation Throne in Yuksom where the first King was named. Phuntsok Namgyal ruled over a vast territory that was many times the current size of Sikkim. His kingdom extended to Thang La in Tibet to the north, Tagong La near Paro in Bhutan to the east, Titalia on the borders of West Bengal and Bihar to the south and Timar Chorten on the Timar river in Nepal to the west. 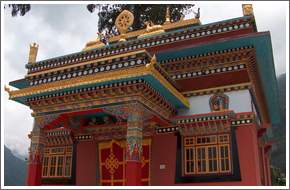 True to the prophecy of Tibet's founder of Buddhism, Guru Rimpoche, some nine centuries prior, three learned Lamas, Lhatsun Namkha Jigme, Kathok Rigzin Chenpo, Nga-Dak Sempa Chenpo, gathered at Yuksam in 1642 from various directions and enthroned Chogyal Phuntsog as the first religious king of Sikkim. A stone throne shaded by a 300 year old fir still stands here today. A foot print in stone in front of the throne is said to belong to Lhatsun Namkha Jigme, and a nearby chorten (stupa) contains soil and water from all over Sikkim. Thus Yuksam occupies an important place in Sikkimese history as the first capital, and Norbugang as an historic cultural site maintained by the Archeological Survey of India. Norbugang is easily reached on a 15 minute walk from Yuksom.

Dubdi Monastery, one of the oldest monastery in Sikkim, is located at the top of a hill about an hour's walk from Yuksam. Also known as the Hermit's Cell after its reclusive founder Lhatsun Namkha Jigme, it was built by the followers of the Nyingmapa sect of Tibetan Buddhism. The trail to Dubdi winds through lush forests high above the village, offering scenic overlooks and impressive mountain views. For bird watchers, an early morning or late afternoon visit is particularly rewarding. Dubdi means 'the retreat'.

Situated at a distance of 25 kms. from Pelling, it is considered to be one of the sacred lakes of the State both by the Buddhist and the Hindus. The Lake remains hidden under the rich forest cover. The birds do not permit even a single leaf to float on the lake surface.

There is motorable road from Pemayangtse right up to the lake area. For those interested in spending a night or two in the peaceful environment, a trekker's hut is available. There is also a Pilgrim Hut.

True to the prophecy of Tibet's founder of Buddhism, Guru Rimpoche, some nine centuries prior, three learned Lamas, Lhatsun Namkha Jigme, Kathok Rigzin Chenpo, Nga-Dak Sempa Chenpo, gathered at Yuksam in 1642 from various directions and enthroned Chogyal Phuntsog as the first religious king of Sikkim. A stone throne shaded by a 300 year old fir still stands here today. A foot print in stone in front of the throne is said to belong to Lhatsun Namkha Jigme, and a nearby chorten (stupa) contains soil and water from all over Sikkim. Thus Yuksam occupies an important place in Sikkimese history as the first capital, and Norbugang as an historic cultural site maintained by the Archeological Survey of India. Norbugang is easily reached on a 15 minute walk from Yuksom.