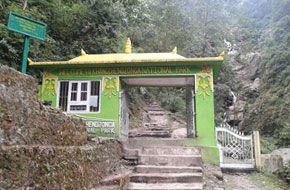 Named after the third highest mountain peak in the world, and nestled in the lap of the mighty Himalayas in North of Sikkim is the Kanchenjunga National Park. Included recently in UNESCO's world heritage sites, it is a rare high altitude national park and the first "Mixed-Heritage" site of the country. At an elevation of 8586 meters, Kanchenjunga lies partly in Nepal and partly in Sikkim. There are numerous glaciers inside the national park with the Zemu glacier being the most significant one, it has an extravagant length of twenty-six kilometers. The area is home to most endemic and rare species of flora and fauna including the Snow Leopard and Himalayan Tahr.

The park, situated in the beautiful state of Sikkim, is sprawled across a vast area of 850 sq km. With the varying elevation of 1,829 m to over 8,550 m, the national park adjoins Qomolangma National Nature Preserve in Tibet and Kanchenjunga Conservation Area in Nepal. Sikkim also has religious significance in the Buddhist culture. It is referred as 'Hidden Land' and what now constitutes the park is the sanctum sanctorum, where religious masters are said to hide religious texts and treatises marked for discovery in later times. Unique in biodiversity, this place is a paradise for trekking with a diverse landscape and breathtaking views. A number of mythological stories have been associated with the mountains and natural elements around; most of these stories have been integrated into Buddhist beliefs and a major source of Sikkimese identity.

Goecha La is a tiny place located in Sikkim, and Goecha La trek is a dream and desire for hundreds of adventure lovers throughout the country. Entangled amidst vibrant and colorful flora and fauna, it is also the way to the astounding Kanchenjunga National Park to dive into the natural beauty. It is also the popular trekking destination for the famous Goecha La Trek that involves adventure seekers from around the globe.

Mount Pandim, located at an altitude of 6,691 m is located very close to Mount Kanchenjunga. It can be seen en route during the Goecha La Pass trek. The mountain is visible from Tsoka. On the final day of the trek during the ascent from Samiti Lake to Goecha La Pass, trekkers walk by the base of Mount Pandim. Zemathang and the moraine of the Onglakhing Glacier are the base for climbing attempts on Pandim.

Samiti lake is a glacial lake in the Onglathang valley in the Indian state of Sikkim, located at an elevation of 15,700 feet. It lies on the route to Goechala Pass and has been attracting visitors due to its beautiful, transparent turquoise color. The lake is an ideal spot for camping due to the beautiful views of the surrounding snow-capped mountains it offers. From Thangsing, it is a two-hour climb up the valley to Samiti Lake. The gradual ascent passes through grazing meadows lined with wildflowers which burst into a riot of color in the pre-monsoon season. The lake is the sacred source of the Prek river.

Zemu Glacier is the largest glacier in the Eastern Himalaya.It is about 26 kilometres (16 mi) in length and is located at the base of Kangchenjunga in the Sikkim Himalaya, India. It may be one of the sources for the Teesta River.From Gangtok to Lachen by road and then from Jakthang the trekking will start and from Green Lake (4935 meters /16000 feet) one has to trek to Zemu Glacier (5600 meters / 18648 feet) The trekking will cover places like YABUK, RIMBIK. The peak of Mt. Siniolchu is just a few kilometres away from the Zemu glacier.Spring and summer treks are of interest to birdwatchers and viewing flowering plants - October and November are best for clear weather and mountain views