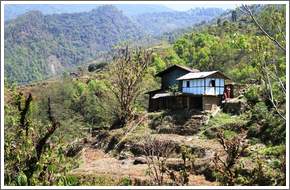 Kewzing village is at an altitude of 1700 meters in the landcape with highest point the Maenam Hill which gradually declines down to Ranjit River and opposite to Tashiding. Kewzing in local Sikkemese Bhutia language means the “Land of wheat Fields” and is also known as Sosing “land of chestnut forest”. The village has a mere population of two hundred people majorly Sikkimese Bhutia community and is blessed with nature’s bounties. The pollution is almost zero with large area covered with lush green forests and home to some of the exotic birds of Sikkim. The village is dotted with cardamom and tea plantations. Kewzing’s location is blessed by Buddhist monasteries on all the four sides with Tashiding monastery in the south-west, Mangbru and Pemayengtshen Monastery in West, Ralong and Ravangla monastery in southeast, Doling Monastery in east and Bon Monastery towards the North. 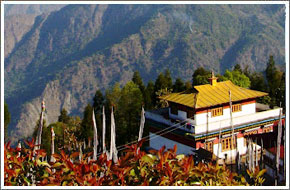 The Bon faith flourished in Tibet upto the 8th Century AD prior to the advent of Buddhism. It is believed that many of it's rituals were assimilated in Buddhism like the prayer flags, burning of incense etc. and with the passage of time this faith was also influenced by Buddhism and has now been accepted as a part of Buddhism.

The Bon Monastery here is the only one of its kind in Sikkim and is a symbol of the determination of a community to preserve their religious traditions. Located 2 kms from Kewzing bazaar is the Mangbrue Gompa, which follows the Nyingmapa sect of buddhism. The invading Bhutanese army used this strategic location in the 19th century and the ruins of their bunkers and outposts can still be seen. 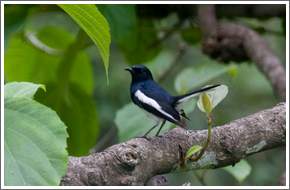 There are number of trails around Kewzing to Doling, Barfung, Bakhim and Mambru villages where hikers get to experience the rich and diverse vegetation of Sikkim. The walks are along plain ridges with undulating elevation making the walks easy and less tiring. One can also see the unique cultivation practises and varied range of crops planted by the farmers of villages.