Known for its Breathtaking views of Mountains and its Beautiful Surroundings 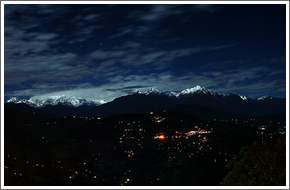 Kaluk is a small village located in the Himalayan foothills of West Sikkim, near the West Sikkim capital of Gyalshing. It is a tourist destination due to the natural beauty of the village and its surroundings. Kangchenjunga, the world's third highest peak, is visible from Kaluk.

The upcoming tourist spot in the western part of Sikkim, has a magnificent command over the mountain views, sunrise and sunset, flora and fauna, village tourism ,historical sites and heritage of Resum Monastery, rich forests and ample area for short treks.

At an altitude of about 5576ft, Rinchenpong is the latest addition to the tourist map of West Sikkim. The place is famous for the beautiful view of the Kanchenjunga range of mountains. Apart from the natural beauty of the surroundings, the place is also quite significant from historical point of view. 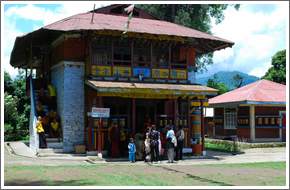 The Rinchenpong Monastery housing the rare idol of Ati Buddha in Yub – yum position was constructed in 1717. But the recorded history of Rinchenpong only dates back to 1860, when the British attacked Siikim. They reached up to Rinchenpong when Lapchas (the original inhabitants of Sikkim) poisoned the water of the pond, the only source of water in Rinchenpong.

In the process killing almost half of the British troops and forcing them to retreat. The pond came to be known as Poison Pokhri and can be seen to this day. In 1924 famous Russian explorer and painter Nicholas Roerich painted the magnificent views of Kanchenjunga from Rinchenpong, making the world aware of the amazing beauty of the unknown place.

A small and almost dry pond, nothing spectacular apart from its historical significance.

Reached by a long flight of stone stairs. A small monastery nothing much spectacular but offers the best view of Kanchenjunga from Rinchenpong.

Lepchas are the original inhabitants of Sikkim. Lepcha house gives an insight into Lepcha lives. It also doubles up as a Lapcha artifact shop.

An afferestion program of the Sikkim forest department it is a nature park ideal for short walks.