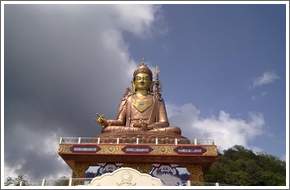 Namchi meaning 'Sky High' is the district head quarter of South Sikkim. Nested on lofty valley at 4300ft and surrounded by the hills Namchi is one of the less crowded towns in Sikkim.

Namchi is fast becoming a major tourist spot and pilgrimage centre. The Namchi monastery, Ralong monastery and Tendong Hill are important Buddhist pilgrimage centres. The world's largest statue (at 118 feet) of the Buddhist Padmasambhava, also known as Guru Rinpoche, the patron saint of Sikkim, is on the Samdruptse hill (The Wish Fulfilling well) opposite Namchi. It was completed in February 2004. It is also said that the Samdruptse hill is actually a Dormant Volcano. Myths say that the buddhist monks have been going on top of the hill and offering prayers to the volcano to keep it calm. There is also a Rock Garden just few kilometers up from the town on the way to Samdruptse. The Rock Garden displays a wide variety of Flora and is a local recreation and picnic spot. It offers a magnificent view of Mt. Kanchendzonga (aka Mt. Kanchenjanga, the world's third highest peak).

Statue of Guru Rinpoche, the patron saint of Sikkim. The statue in Namchi is the tallest statue of the saint in the world at 36 metres (120 ft).

A helipad is located 5 km away from town at an altitude of around 5000 fts. From here one can get the most panaromic view of Mt. Kanchanzonga with the surrounding mountain a part of Darjeeling Kalimgpong and the rolling plains of Bengal. The visitors can savour the breathtaking view of temi tea garden the one and the only tea estate in the state which produces top quality tea in the international market.

In the month of February, the Namchi garden hosts it annual flower show. The flower show is the largest in Sikkim with flowers in a riot of colours. The prime attraction of this show is the display of exotic and rare orchids.

Historically, Namchi was the place where Pende Ongmoo, the trecherous princess who poisoned one of the Chogyals of Sikkim, was caught and killed for her deed. Legend says her spirit still haunts the foothills of Ghurpisey.

The latest tourist attraction is the completion of Char Dham - a Pilggimage center of the Hindu deity Lord Shiva. It contains the temples of the four most important shrines of India. A Ropeway is also being constructed from Samdruptse to Namchi town and then to Char Dham for People to see panaromic views of the hills.

Water falls is spectacular in summer that attract many falls lovers, The power station by name Karchen Power house is the oldest in west Sikkim which was made in early 70s during the last kings government which successfully supplied energy to the most villages and towns of West Sikkim including Gazing ,Tigjuck and Pelling. River is beautiful and breath taking. But it is only in the winter when river water decreases and becomes gentle the tourists with families go right inside the river bank and enjoy river and local children are found doing sweepings during . Fishing is common activity of the locals all through the year.

Situated on the bank of River Rangeet is the hot spring 'Phur Tsa Chu', half an hour drive from Legship and one hour drive from Jorethang. Pilgrims from all walks of life come to dip in this hot spring during the month of January to March. 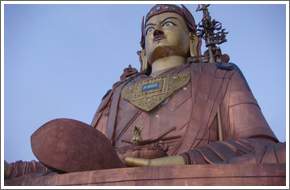 Samdruptse literally means 'wish fulfilling hill' in the Bhutia language. Situated near Namchi in South Sikkim, it is at a distance of 75 kms from Gangtok. A unique, awe inspiring and gigangtic 135 feet high statue of Guru Padamasambhava is installed atop Sampruptse. It is the highest statue of Guru Padamasambhava in the world. His Holiness the Dalai Lama laid the foundation stone of the statue in October 1997. It took nearly three years to complete the statue.

Guru Padmasambhava also known as Guru Rimpoche had blessed Sikkim more than 1200 years ago. The statue is therefore a fitting tribute to this patron saint of Sikkim. The statue funded by the State Government was constructed and installed by His Eminence Dodrupchen Rimpoche and members of his Chorten trust. The installation was conceptualised by Shri Pawan Chamling, the Chief Minister of Sikkim and he remains the motivating and guiding force behind the entire project.

The ultimate plan is to make Samdruptse as an international pilgrimage centre on completion of meditation huts, ropeway library, guest house, public amenities, parking yard etc, around the towering statue. The message of love, compassion, peace and harmony is aimed to spread throughout the world from this historic hill.

Sikip is located on the banks of River Rangeet in the South District. The drive from Gangtok to Sikip takes about five hours via Legship and is also accessible from Siliguri and Darjeeling via Jorethang. This place, an Anglers paradise also has a charming natural surrounding. Together with this one can also avail the facility of rafting down the Rangeet River. 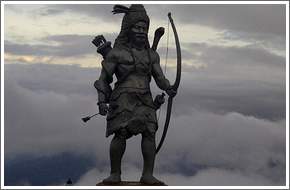 This unique Pilgrim Centre has a main temple of 108 feet height on which is based the 87 feet high statue of Lord Shiva on the sitting posture at the Solophok Hill. Apart from Shiva statue, this Pilgrim Centre also has replicas of the twelve Jyotirlingas, to offer one platform for Shiva devotees.

Lord Shiva incarnated as Kirateshwar in Indrakeel (Present Sikkim). Therefore, in this incarnation he is locally worshipped by the people of Sikkim as Lord Kirateshwar. A statue of 16 1/2 feet height of Lord Kirateshwar is also installed in the complex.

In order to attain Moksha, the Hindu belief is to perform pilgrimage to all the existing four Dhams. Thereby, replicas of these four Dhams, namely Badrinath, Jaganath and Dwarka dedicated to Lord Vishnu and Rameshwar, dedicated to Lord Shiva is also constructed.

The pilgrim centre is constructed on top of the Solophok Hill in South Sikkim which is about 5 kilometers from Namchi town over an area of 28.958 Ha of land. The built up complex covers an area of approximately 7 acres and is accessible by a smooth road.

This pilgrimage centre has been dedicated and designed to place Sikkim in the very conscience, heart and minds of the citizens of India and beyond. Apart from providing a unique religious and cultural ambience, the Pilgrimage-cum-Cultural Centre established on a grand scale hereafter ought to be a tourist attraction at the National as well as International level. The existing linkages have been explored and the tourist activities targeted are Pilgrimage, cultural activities, seminars, religious discourses, nature study and passive recreation.

Above Damthang, overlooking Namchi, there is a small flat stretch ofland at an altitude of 8,530 ft surrounded by lush green ancient forest which is popularly known as Tendong Hill. Historically, this has been a place to rest for Buddhist Lamas who spent years in meditation amidst the silent scenic grandeur. Legend has it that the Tendong Hill saved the Lepcha tribe from the ravages of deluge when the whole world was flooded - similar to Noah's Ark of the Bible. Even today, the Lepchas perform pujas to pay reverence to the Tendong Hill on the occasion of Lho Rham Faat.

The view from the top of the Tendong Hill is something to be cherished and enjoyed as it spans across the plains of Bengal to the majestic heights of the Himalayan Ranges. Trek to Tendong from Damthang Bazaar, the nearest road head, is just about two hours. One can also proceed to Namchi by trekking via Tendong Hill.