Known for its Rich Variety of Flora and Fauna 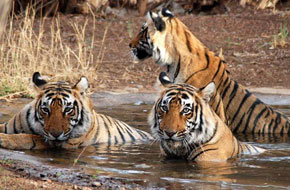 Sprawling over an area of 51.76 sq km, Fambong La Wildlife Sanctuary is one of the best places to observe the wild animals. It is located at a distance of around 20 km from Gangtok. This sanctuary is also a home to different species such as Red Panda, Himalayan Beer and Civet Cat Binturong. Dense forests of katus, bamboo, ferns, oak, champ and kimbu also occupy the sanctuary. Due to the variance in altitude ranging from 1,280 metre to 2,652 metre, the sanctuary holds diverse flora and fauna. In addition, the sanctuary also embraces plenty of rhododendrons and wild orchids. The place is also a home to different types of birds and butterflies, hence regarded as Avifauna.

Tinjure is the highest point of this sanctuary that stands at an altitude of 7,000 feet. This highest point also has a wooden observation tower standing erect, which is managed by the Forest Department. Around this tower, basic accommodation facilities are also available for tourists.

The views from the second highest mountain pass are absolutely stunning. It's wiser to start for the pass at the break of dawn and arrive there by morning. En route you'll come across two beautiful sights; the Jhakri Waterfalls and a stunning glacial lake called Changu (Tsomgo Lake).

This 17th-century monastery at a height of 6,500 feet, is dedicated to the Nyingmapa order and is situated about 40 kilometres from Geyzing. Perched on a hillock between River Rangeet and River Rathong, you'll see many holy scriptures carved on stone plates.

The Tashi Viewpoint is one of the best places to go to with a pair of binoculars, water and some sandwiches. From the Tashi Viewpoint, you get the perfect view of the snow covered peaks of Kanchenjunga.

Singhik is a sleepy little town in Sikkim known for its unmatched natural beauty. For tourists, Singhik is like a paradisiacal retreat from the cacophony of the cities. The Singhik Viewpoint is situated just on the wayside of Singhik and provides stunning views of Kanchenjunga and Mt Siniolchu.

Located 17 kilometres from Gangtok, the historical town of Kabi Longstok is where the friendship treaty was signed between the Lepcha chief Tekung Tek and the Bhutia chief Khey Bum Sar. A stone pillar was built to mark the location of the place where the treaty was signed.