Known as the Land of Orchids 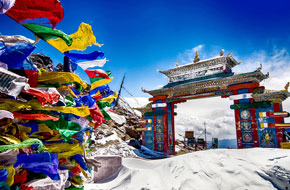 The unspoilt rivers, lakes, hills and valleys along with wildlife and culture make Arunachal a Travelers Paradise and a gem of the Northeast India. This Northeastern state is indeed a dream travel destination in India. Arunachal Pradesh shares its southern boundary with Assam, and on its west is Bhutan, whereas, China makes the north and northeast border for the state, and the pretty little Myanmar snuggles the east. It covers a spectacular area of 83,743 sq km that is dotted with numerous rivers, lakes, forests, hill ranges, valleys, grasslands, and sweet little settlements. One of the major tourism attractions in Arunachal Pradesh is the opportunity for adventure sports. The natural trails from Bhalukpong to Tawang via Dirang and Bomdila are perfect for motor adventures in Arunachal Pradesh.

Tawang is a high altitude town located in the lap of the mighty Himalayas which offers a perfect blend of nature and culture. Since the town boasts an elevation of 10,000 feet, it is a paradise for any mountain lover looking for high altitude places to visit Arunachal Pradesh. The picturesque town is replete with numerous tourist attractions like vibrant Buddhist monasteries, high altitude passes, war memorial and scenic lakes which make it an enticing holiday destination. Among the most important tourist attractions, Tawang proudly cradles are the largest monastery in India and Tawang War Memorial built to commemorate the martyrdom of soldiers who laid down their lives in Sino-Indian war.

Ziro Valley is a picturesque valley tucked away in the Himalayan foothills. Surrounded by the pine ridden mountains, paddy rice fields, quaint hamlets, bamboo huts and vibrant range of flora and fauna, Ziro Valley is a paradise for nature lovers, adventure seekers as well as cultural vultures. Being a World Heritage Site, this valley gives you a chance to explore the culture and tradition of the tribe Apatani which is an exclusive experience that you will cherish for the rest of your life.

Another treat for wildlife enthusiasts in Arunachal Pradesh, Namdapha National Park is the largest protected area and the third largest national park in India. The park is spread across an area of 1985 sq. km and features an elevation range of 200 metres to 4571 metres. The towering mountains, dense jungles, and many water bodies in the national park harbour an extensive range of wildlife species including snow leopard, red panda, and clouded leopard, and the park is thus considered to be one of the most excellent areas in terms of biodiversity.

Sela Pass is a mountain pass which enjoys an elevation of 13,700 feet. This pass is considered sacred by Buddhists, and it is believed that there are 101 lakes around it. Snow covers this pass all year round and it remains open for the tourists during all seasons. The fame of the pass is also attributed to the divine high altitude Sela Lake or often known as the Paradise Lake that adds grace to the picturesqueness of the place. Sela Lake freezes during the winter which makes this lake dreamlike.

It is definitely one of the most significant places to visit in Arunachal Pradesh; Tezu is a hotspot for tourism in the state. Located amidst the scenic Mishmi Hills, this town has a lot on offer for tourists that include wildlife sanctuary, museum, botanical garden, and quaint villages. However, the most popular attraction here remains the photogenic.