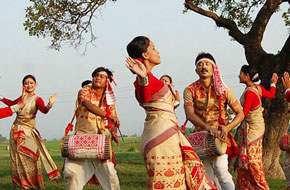 Assam is one of the most beautiful states in the Northeastern part of India. Its other name is the Gateway to the Northeast, as it is the main connection to reach the other states in the Northeastern part of the country. The state also shares an international border with Bhutan and Bangladesh. It is comprised mostly of the valleys of Brahmaputra and Barak. Assam and the rest of the Northeastern states are connected to the rest of the country via Siliguri, a 22-kilometre small strip of land in West Bengal. The people, culture and traditions of Assam are similar to that of the South Eastern countries. There is so much to provide and the vast unexplored lands to explore. It is not just rich in culture and is the gateway to the Northeast but is also the wilderness capital of the Northeast.

The Area was declared in 1905 as the Kaziranga Proposed Reserve Forest, whose main goal was to preserve the one-horned rhinos in the region. The park is home to the largest population of the world's one-horned rhino species and 9 of the 14 primate species in the country lives in the park.. The park also has the largest numbers of the wild Asiatic water buffalo and Eastern swamp deer. The national park also has the highest density of tigers at about one tiger per five kms squared. It is definitely a must visit.

It is said that Kamakhya Temple is the place where Sati retires in secret to satisfy her amour with Lord Shiva. The temple is popular among pilgrims of Tantric worship, more so during the annual Ambubachi Mela Festival. In 1498, it is believed that Hussein Shah destroyed the temple complex. It was then again rebuilt by Naranarayan during the year 1565. The Ahoms also had some part in the reconstruction of the temple.

It is the epitome of adventure in the Assamese region. This National Park also continues over the border and merges with the Royal Manas National Park of Bhutan. The park is famous for its high population of the wild water buffalo species. The park was declared as a sanctuary during the year 1928, although it was a hunting ground for many years before that. Other animals that you can find in the park are the following: pygmy hog, Indian rhinoceros, sambar and Malayan giant squirrel.

This is an astronomical research centre, which host many educative and interesting shows on astronomy and science. It's the most advanced planetarium in the state of Assam. There are daily shows about the solar system although they also conduct seminars and activities for students and science lovers. The planetarium also has a library section with books about space and terrestrial bodies.

You can find this wonderful piece of art and architecture in Jogighopa in the Bongaigaon district. These caves are a fine example of the Salasthambha style of architecture. They are not as elaborate as the rock cut caves in Western India, but they do provide some evidence that this type of architecture did exist in the North Eastern part of India too.