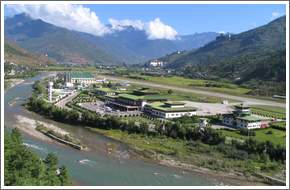 Paro is the entry point for all visitors traveling by air to Bhutan, country’s only national carrier Druk-Air and here you will be touching down the Paro international airport leaving behind the beautiful high mountains and valleys in the sky. As soon as you get down from the aircraft you will be able to see the Paro Dzong. Paro valley is the most beautiful of all valleys in Bhutan’s and was historically the centre of two of the most important trade routes to Tibet.

The Paro Chu (river) flows south from its watershed in the Chomolhari range. Above it on the rocky outcrop of the steep hillside stands the Paro Dzong overlooking both sides of the valley, the National Museum, which used to be a watchtower (Ta dzong) for the dzong. It contains a collection of art, costumes, relics, religious paintings, handicrafts, and national stamps. Leaving behind the town is the Kyichu Lhakhang, one of Bhutan’s two oldest and most sacred monasteries dating from the introduction of Buddhism in the 7th century. Further up the valley is the Drukgyel Dzong now in ruins recalls the days when Bhutan was frequently and unsuccessfully attacked by armies from the north. This dzong was destroyed by fire in 1951.

The gem-like Taktsang monastery or “the Tiger Nest” clings to a sheer, 900m above the ground which is the most popular spiritual heritage sites. An illusion to the popular legend that Padma Sambhava flew here from Tibet on the back of a tiger. It is a short climb of one hour thirty minutes to two hours to the top.

Let the ruins of this dzong tell you a tale of how Bhutanese warriors defended Bhutan from the invaders from the north in the 17th century. This dzong was built by Zhabdrung Ngawang Namgyal in 1646, to commemorate his victory over the Tibetan invaders. Though largely destroyed by fire in 1951, the outer walls and the central tower remain an imposing sight. On a clear day, treat yourself with a splendid view of Mt. Jumolhari from the approach road to Drukgyel Dzong.

Explore the Rinpung Dzong which the locals call the ‘fortress of a heap of jewels’. Built in 1646 by Zhabdrung Ngawang Namgyal, the dzong stands on a hill above Paro Township. It is linked by the traditional cantilever bridge (called the Nemi Zam) over the Pa chu where one may pose a photograph. Experience a walk up a paved stone path running alongside the imposing outer walls. Once inside the Dzong, you will be welcomed by the monks, architecture and the ancient frescoes.

On a ridge immediately above Rinpung Dzong is the Ta Dzong, built as a watchtower to protect the Dzong from intruders and warring factions. In 1968 Paro’s Ta Dzong was inaugurated as the National Museum, and now holds a fascinating collection of art, relics, religious thangkha paintings, Bhutan’s exquisite postage stamps, coins and handicrafts, together with a small natural history collection.

Go back in time and history and visit the 7th century Kyichhu temple. As the name suggests, the temple is a reservoir of peace, where you will really feel at peace here. Next to the temple is the house that is now turned into a museum dedicated to the late Dilgo Khyentse Rinpoche. One can come across photographs and other artefacts belonging to Rinpoche.

Often called the mini- Taktsang, Dzongdrakha temples are built on the cliffs above Bondey village. The walk there is not as strenuous as to Taktsang. Legend says one of the temples is built around a levitating monument. Folks built a stronger temple around this monument with the hope that the levitating monument does not fly away into the sky.

If you are as fit as the mountain goat, Kila Gompa awaits you. This magnificent clusters of temples built on the cliffs have been home for nuns for a long time. Kila in Sanskrit means a subjugating spiritual dagger that destroys the negativities. Hike up this temple and subjugate all the negative energies within you. If it does not give you the spiritual satisfaction do not worry because you will feel physically rejuvenated after the hike.

Often called the Tiger’s Nest, perched on the cliffs, has awestruck many a visitor. “Trip to Bhutan is never complete without climbing to Taktsang”, says one tourist. Indeed it’s true as the journey there fills you with spiritual bliss. For those not choosing the spiritual side it is the dramatic, artistically built monument that becomes a hiker’s delight. Take a trip to this dramatically set Buddhist relic hanging from a cliff. Experience the uphill climb as you ascend more than two thousand feet from the valley floor.

The unusual and circular lhakhang, reminiscent of the Shanag, or the black hat worn by the Bhutanese Black Hat dancers was, built by the great “Builder of iron chain bridges,” Drupthob Thangtong Gyalpo. Experience a visit to this unique temple whose founder ws extended invitation by the two guardian deities of Ap Chundu and Jowo Drakey.

This 14th century temple located on the base of a mountain across the Pa chu on the Paro-Thimphu highway, is a must visit temple in the Paro valley. Built by the great master architect Thangtong Gyalpo, the temple houses some unique statues. To get to the temple one may actually walk over the iron chains that spans over the Pa chu.

The five-day Paro Tshechu is one of the biggest religious celebrations. Mask dances are performed to illustrate Buddhist moral tales from various Buddhist masters. You may attend the tshechu together with the Bhutanese people from all walks of life who join the residents of Paro in their best finery to attend the dances. One can witness the popular folk dance called the Wochubi Zhey that commemorates historical events.

Picturesque farm houses dot the valley amongst fields and hillsides. We welcome you to enjoy the hospitality of the Paro farmers. Thrill yourself as the farmers welcome you to their homes with genuine smiles. The two to three-storied Bhutanese farm houses are handsome in appearance, with colourfully decorated outer walls and lintels, and are traditionally built. A visit to a farm house gives an interesting glimpse into the lifestyle of a farming family